I can't believe it is March already, and our informal group of dedicated handspinners once again hosted the first spin-in of the year. Many thanks go to Terry Prehara, who has taken the responsibility of leading our group in organization and hosting. 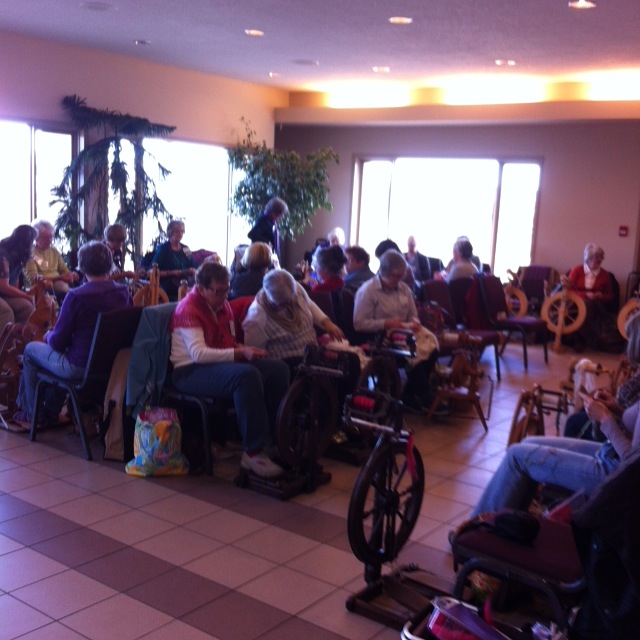 We had a full house of 37 spinners and 2 vendors: Anne Carmichael with her sock machined socks, stitch markers, and various other tools for handspinners, and myself with fibre and yarn.

The morning was taken up with the Bash the Stash - people brought in something fibre related that they did not want or need anymore, put them on the table and wrote their name on a ticket. After all was placed, names were drawn, and that person could go to the table and take something that they wanted in exchange - always a lot of fun.

Lunch was provided by Mandy again - she takes over the kitchen and always feeds us well. This year she made a Danish dish of chicken, asparagus, mushrooms and rice, and a beautiful spinach-mandarin salad, as well as her home made buns. Thompson Treadlers provided lots of goodies to keep us going before and after lunch.

The after noon was show and tell -
and there are always treasures to be oohed and ahhh'd over. 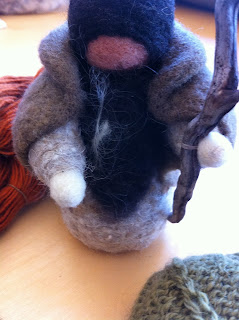 Barbara Articus of Lumby Loves to needle felt, and is working on a shepherd with sheep. So far, the shepherd has been done. She also brought some handspun handknits that were dyed with stinging nettle.The yarn was treated with alum, the nettles were dried, then chopped up and soaked into a tea, strained, and the yarn then dyed. 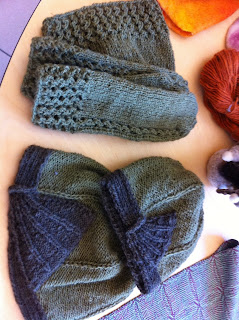 Judith Glibbery brought some fibre that she had dyed, and another spinner brought some handspun skeins, one of which she made from fibre bought from me at a previous spin-in. I must repeat that colourway. 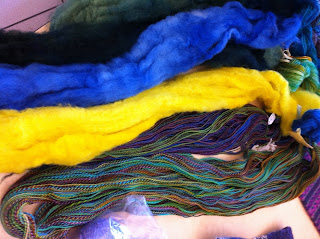 Margaret Fryatt of Ranfurly Farm near Chase brought some of her prize-winning fleeces - she raises Gotland and Bluefaced Leicester and crosses
them from time to time. 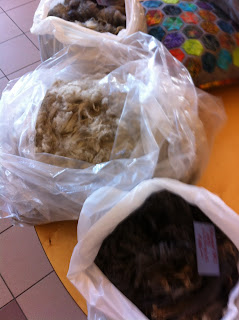 Of course, everyone then has to admire and ask questions. 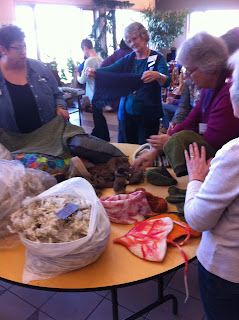 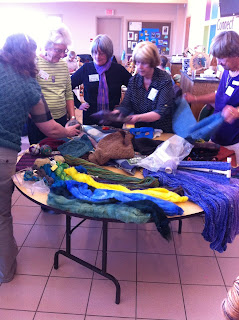 Terry Prehara showing me the shawl she made, handspun from my Camo colourway in merino/nylon, and handknit in Nurmilintu pattern, free on Ravelry. 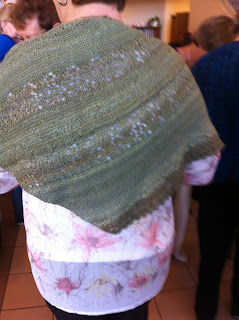 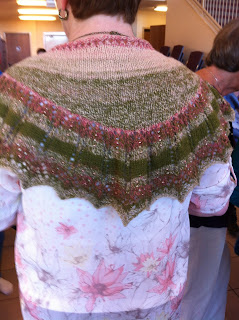 Another lovely shawl, made by Janet Payne of our group. Handspun from a batt purchased at Knit City from Calliope, and handknit in the Indian Feathers pattern, free on Ravelry, highlighted with beads.

I was spinning a blend of Polwarth, Mohair and Silk and have a finished skein of 530 yards. This was spun as a single, aiming for a pair of socks. 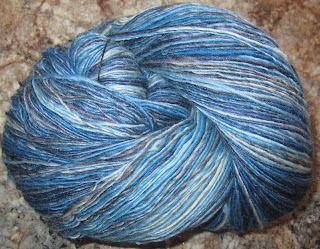 Posted by Mary-Anne Smith at 10:26 No comments: