At our recent spinning retreat (Desert Mesa Retreat, Cache Creek, BC), we were encouraged to do something with the number 10, to celebrate the 10th anniversary of this retreat. I came up with a list of quotes about knitting.
One week after the retreat, I was a vendor at a fairly new event in Vancouver called Knit City. 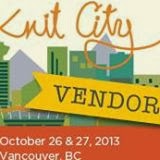 The guest speaker on Saturday night was Stephanie Pearl-McPhee, otherwise known as The Yarn Harlot. Here is a picture of the organizers Amanda and Fiona, with Stephanie in the middle. 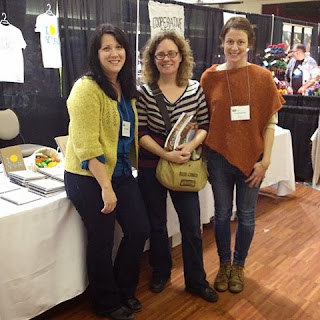 Because 9 out of the 10 quotes were from Stephanie's writings, I felt obligated to get her permission first before I posted this blog, which she gladly gave me. Don't miss the opportunity to hear her speak (or buy her books). She is a hoot!

So here are myTop Ten:

Finally, some pictures from the Knit City event. 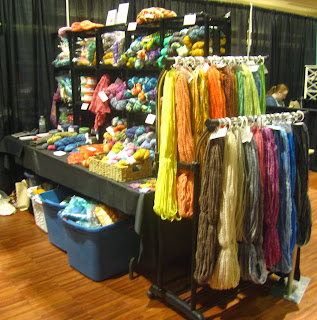 Some fibre from The Wacky Windmill from Alberta 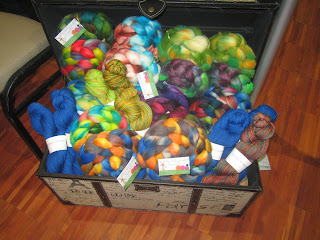 Batts to die for. 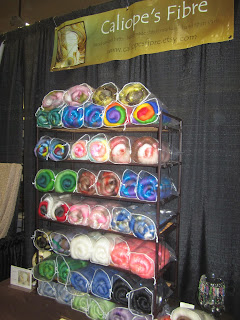 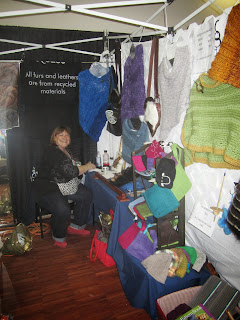 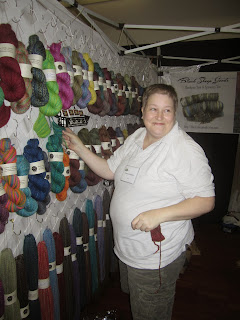 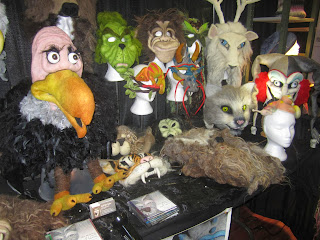 She liked it so much, she wasn't even going to knit it. 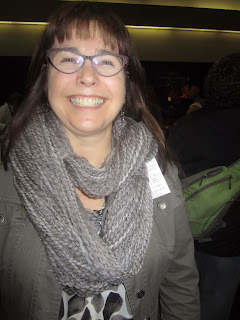 A customer from Fibres West, showing off a cowl she made from my yarn purchased last spring. 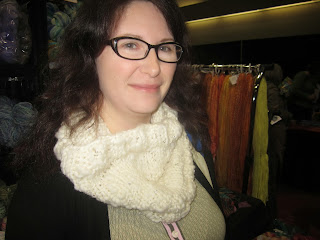 Oh, did I mention there was yarn for sale? 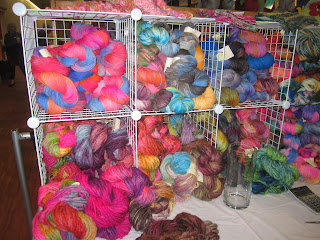 After a long weekend's work, my travel buddy Sheila Grant and I relaxed at the Old Spaghetti Factory in Gastown. A great weekend! 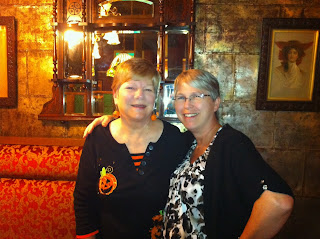 Posted by Mary-Anne Smith at 11:18 No comments:

This year was a special year - the 10th anniversary of the retreat being held in Cache Creek, BC. It was decided that a 2-day retreat was not long enough so this one was 3 days. Everyone arrived Thursday afternoon, and went home Sunday afternoon, after having spun, laughed, watched, learned, entertained, ate, spun, ate, spun, ate and somewhere in there, slept. We had so much fun, it was decided that future retreats should always be 3 days!
Here are some pictures of some of the goings-on: 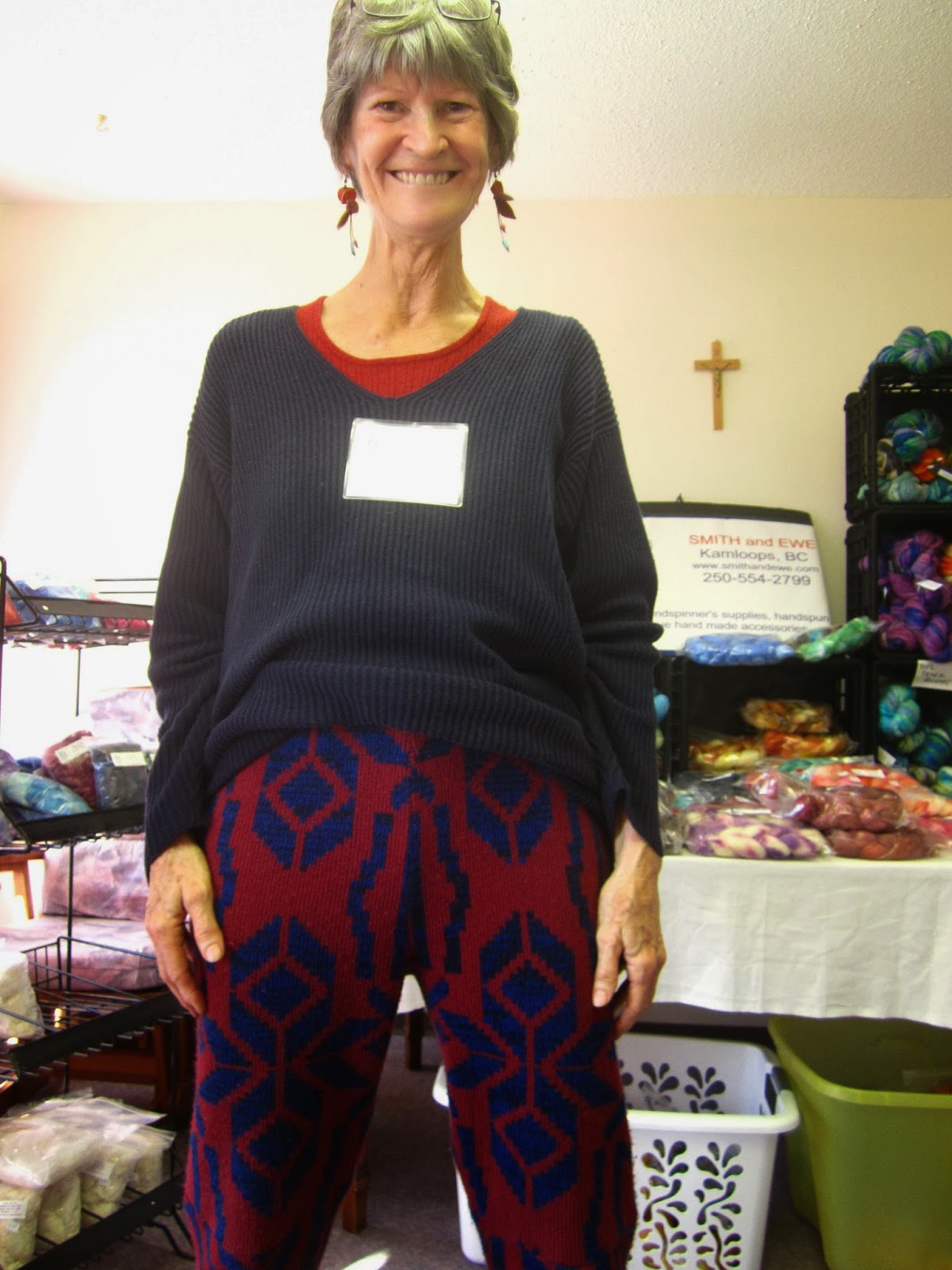 Gudie Hupfauer modelling her "sweggings" with interesting pattern placement. (Yes, they are made entirely from a recycled man's sweater). 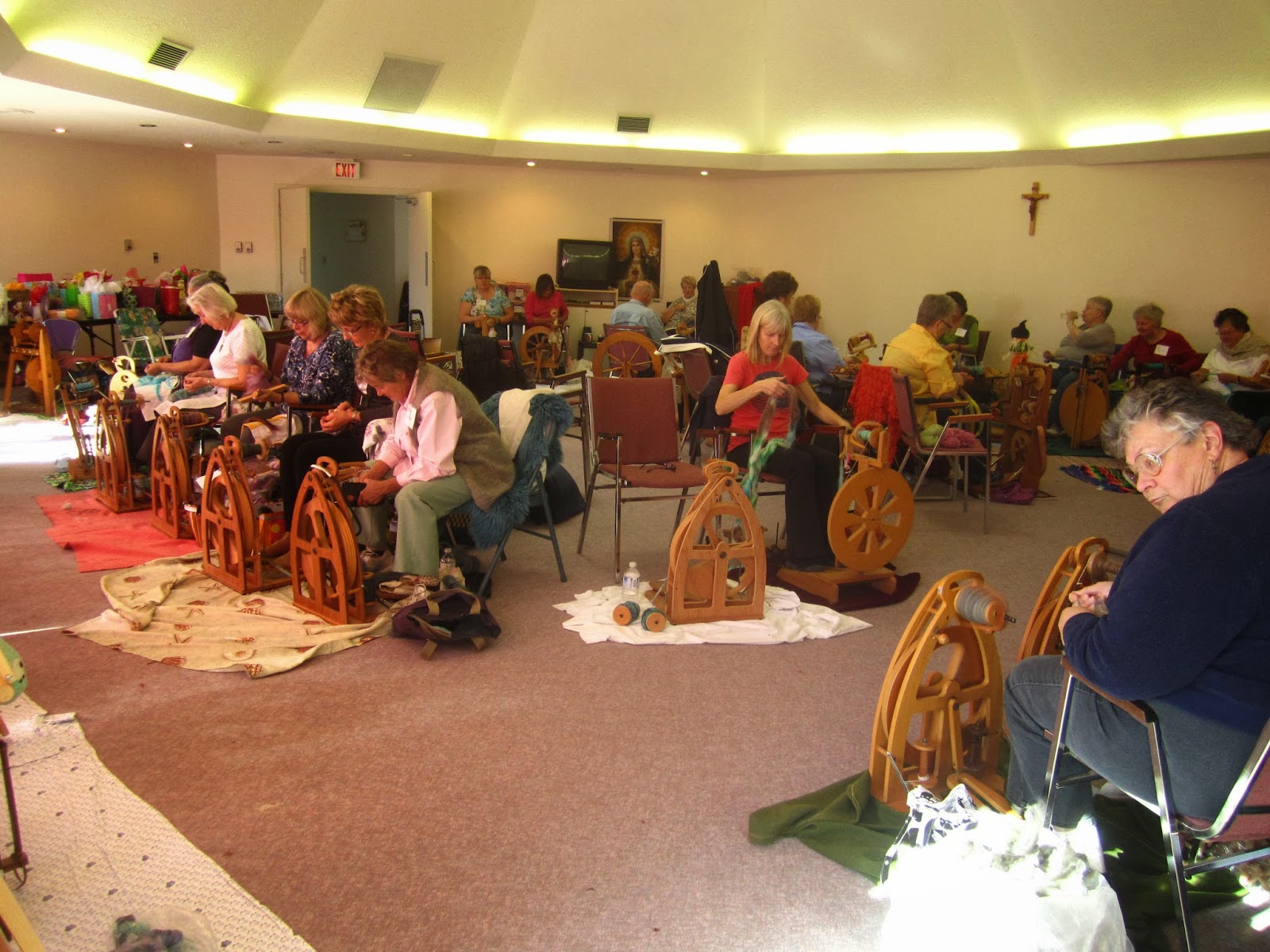 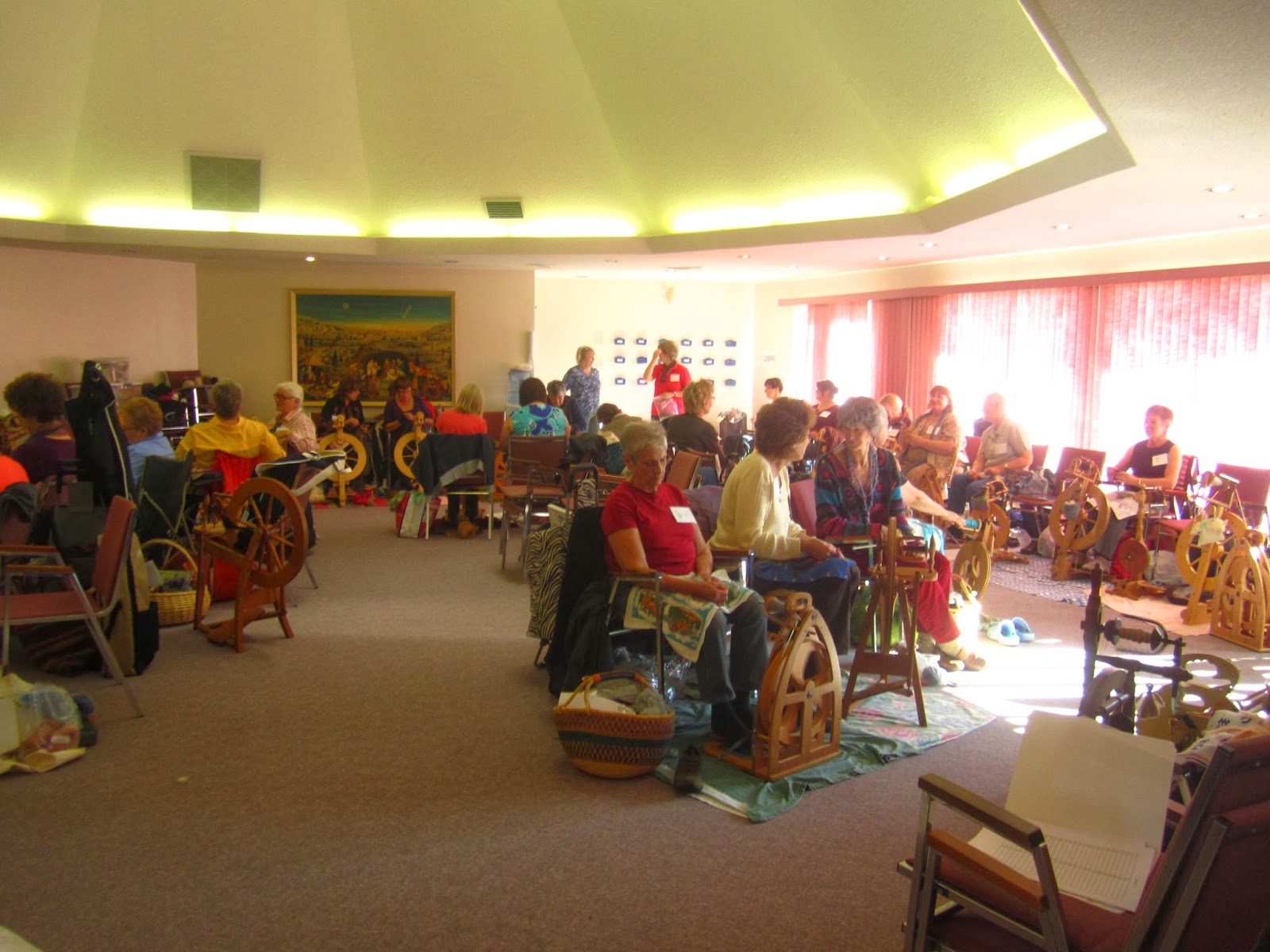 There were 51 of us at the event - some have been at these retreats since they were first started back in the late 1990's at Tulahead, BC. 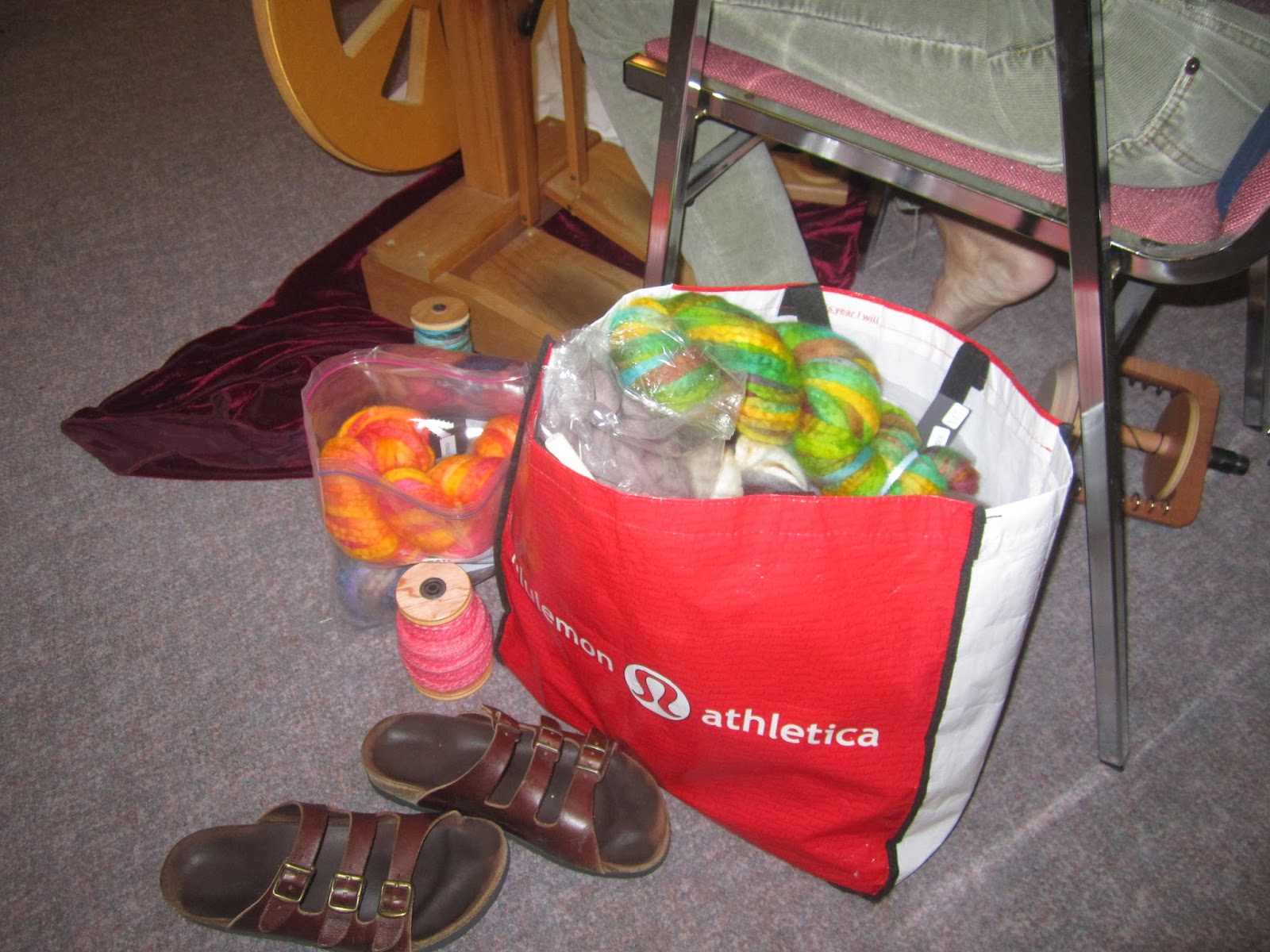 A bagful of fibres purchased from my shop, waiting to be spun. 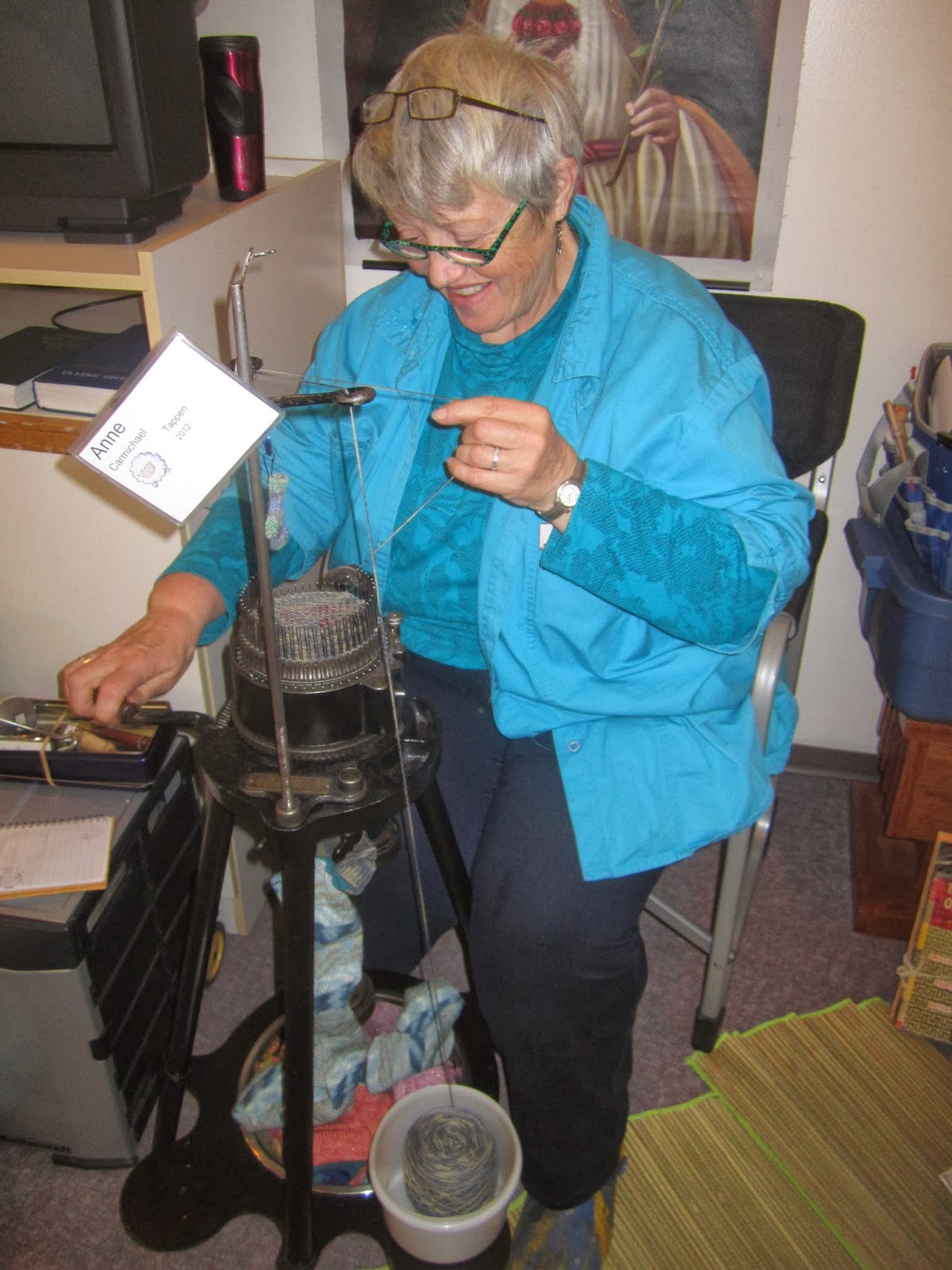 Anne Carmichael brought her sock knitting machine, and fascinated us all with the workings.


Of course, there was a Show and Tell - with so many beautiful items to show, and so many stories to tell, we had to spread it out over 2 days. This shawl would have taken the Fan's Favourite - an illusion shawl, handknit by Gail Wensley from Whistler, knit only with knit and purl stitches, revealing a picture only when held at just the right angle. 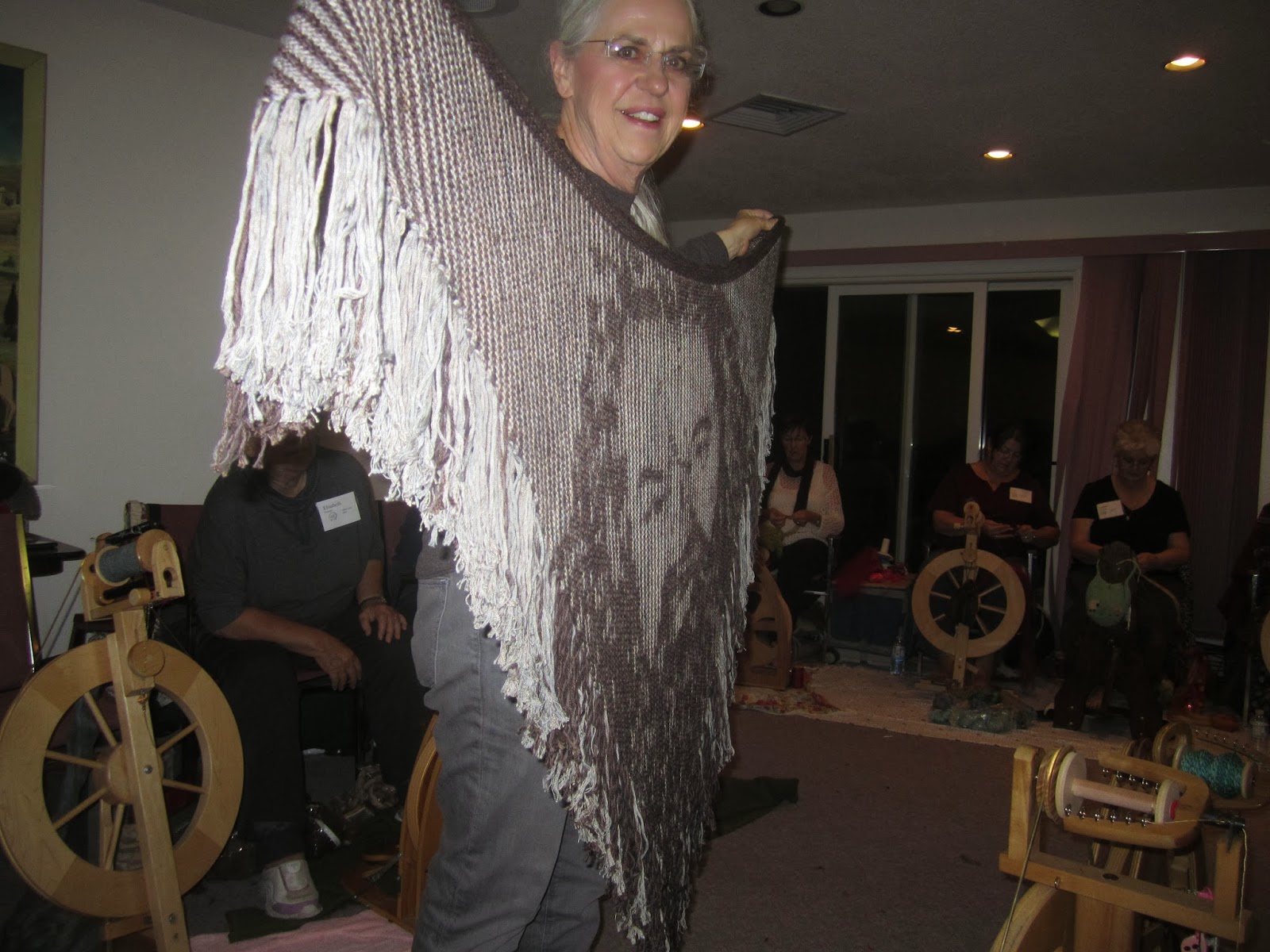 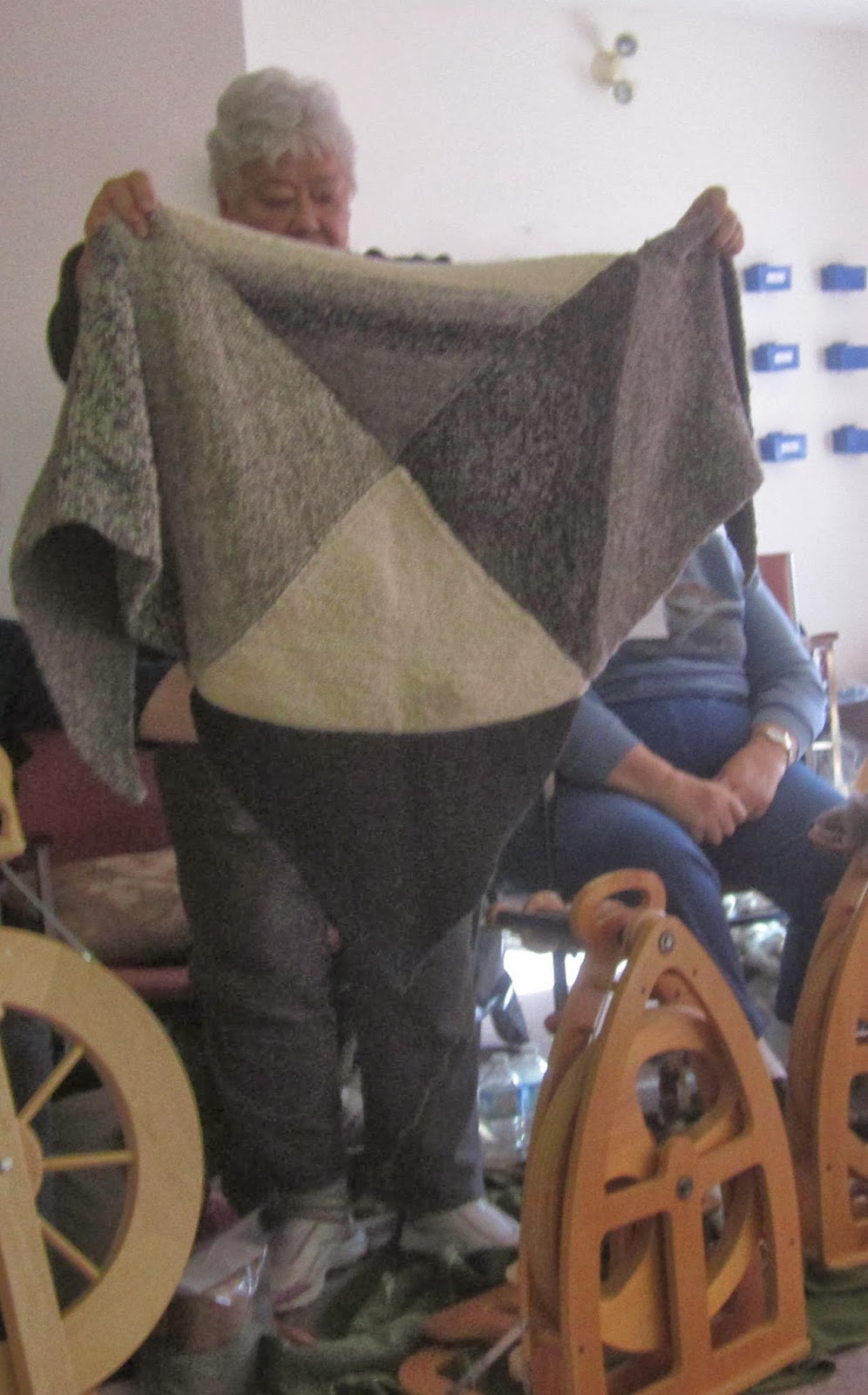 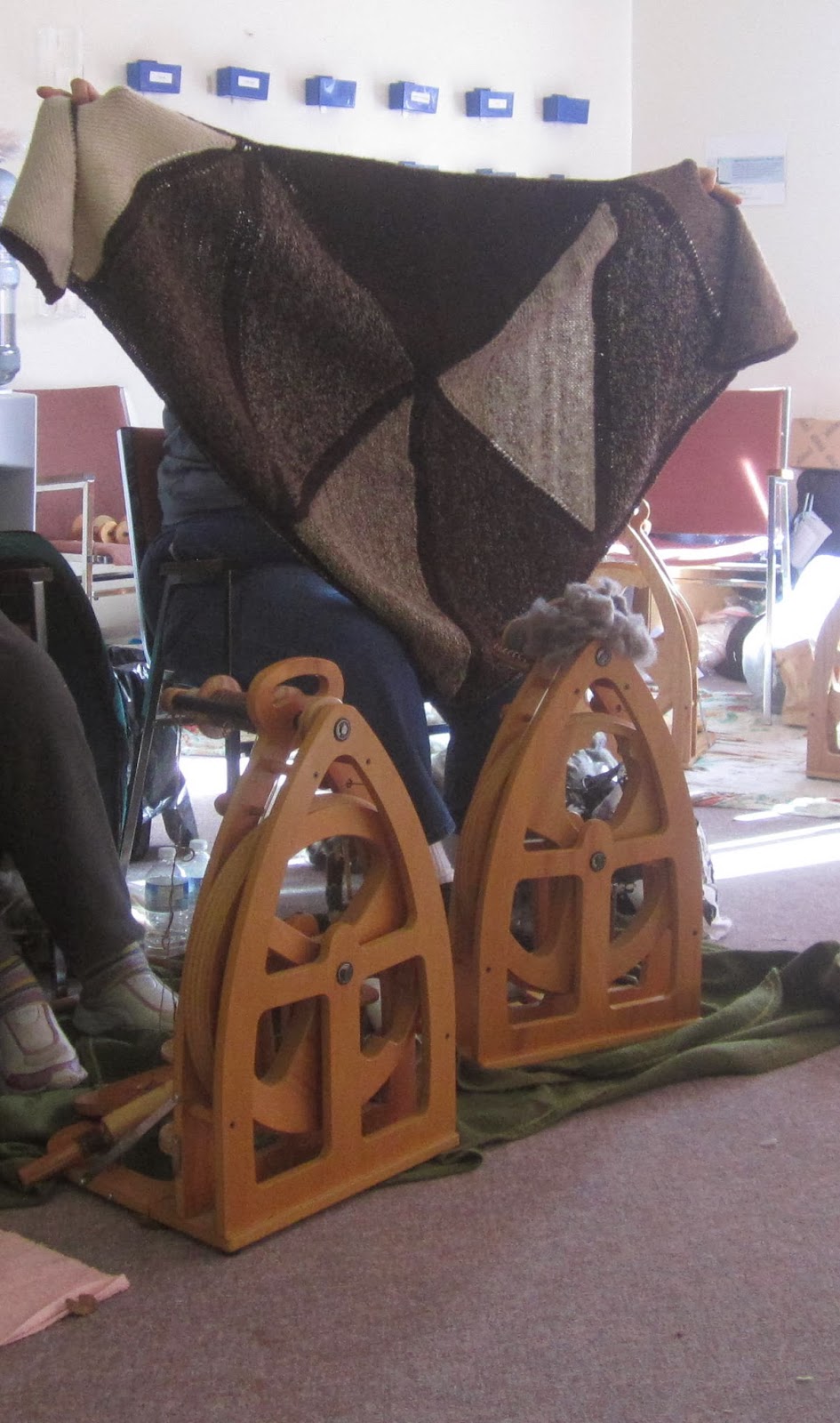 The theme of the retreat was 10, and everyone was encouraged to come up with something to do with the number 10. Several of us managed to do this - here are some examples: 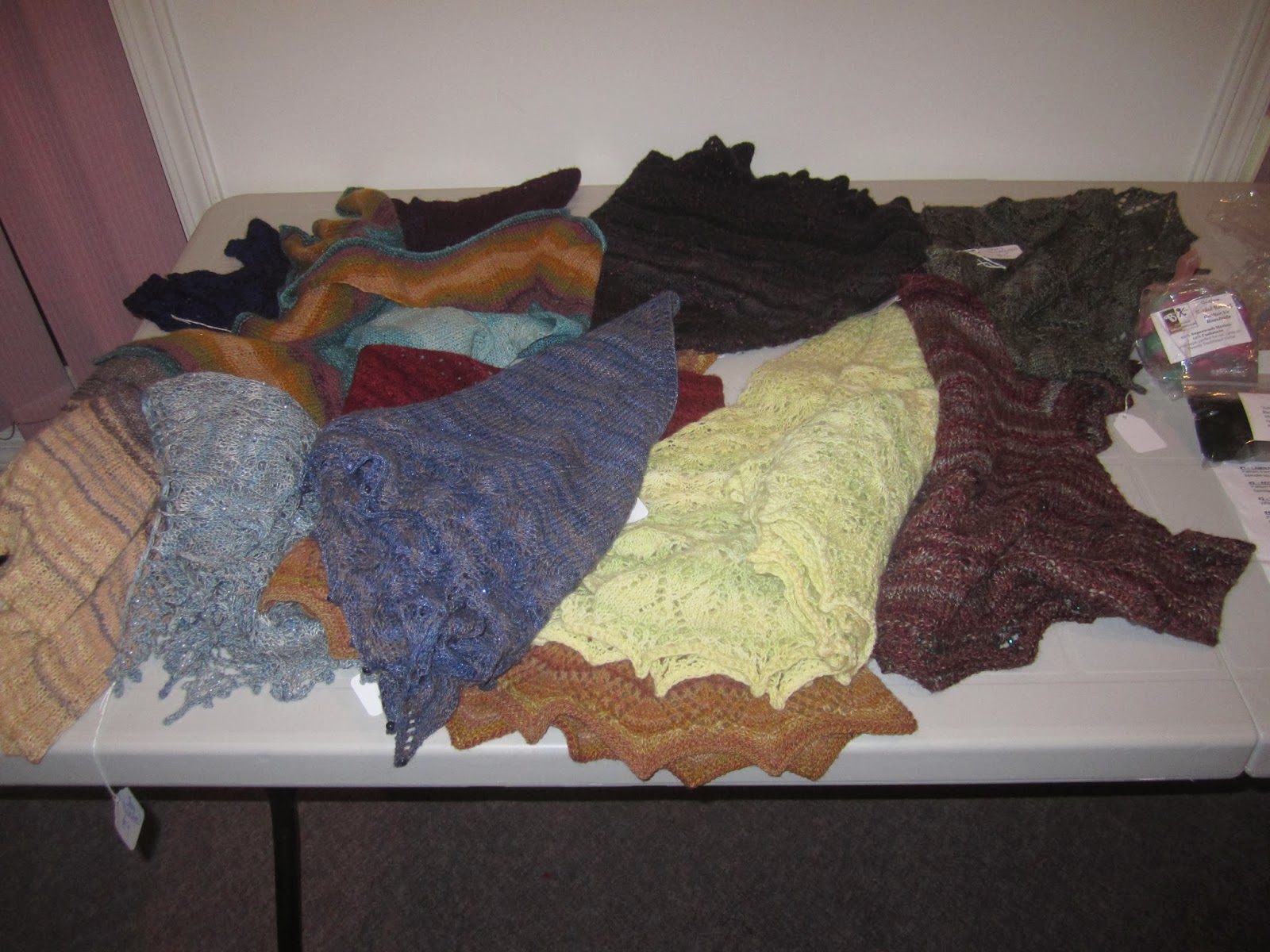 Sandra McNaughton from Summerland brought 10 shawls that she has knitted out of laceweight handspun yarn made mostly on drop spindles! 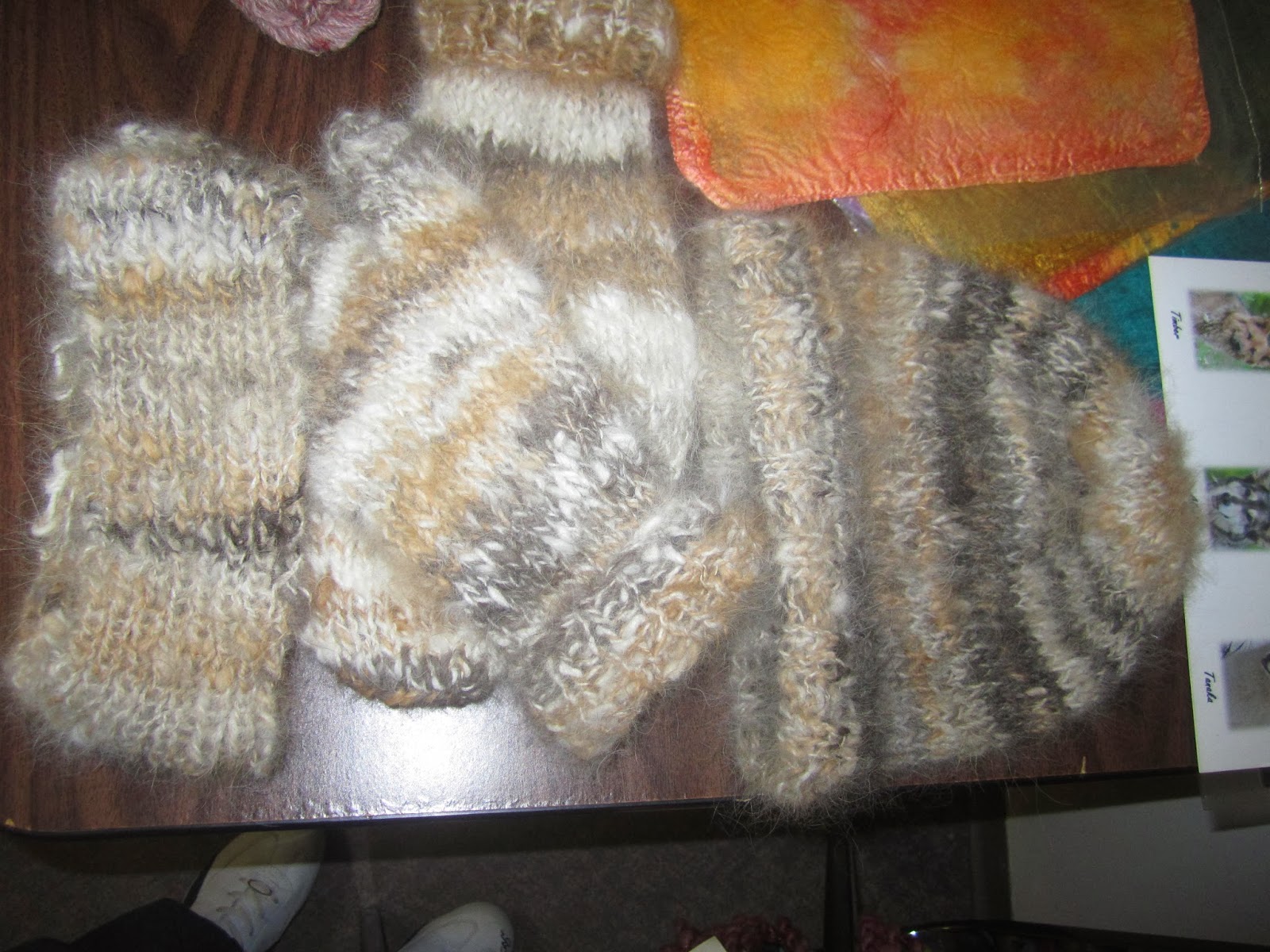 Cecilia Harris brought a matching set of headband, mittens and hat made from handspun dog hair, and pictures of the 10 dogs that she harvested the hair to spin.
Donne Arneson brought 10 skeins of silk that she had hand dyed; Donna Faulkes brought 10 handspun skeins of yarn, each from a different breed of fleece, Gail Dickson brought 10 items made from handspun yarn, Heather Specken brought 10 items (woven and/or knitted and/or handspun) that she made in the past year, Karen Bonter told stories of the first 10 years of the Desert Mesa retreat, Lynn Rettberg brought many pairs of hand knit socks and gloves, and it went on.
This is a shawl made by Melody Lang of Nanaimo, it is handspun and beautifully knit, from a colourway of fibre that I produce called "Ripe Banana". 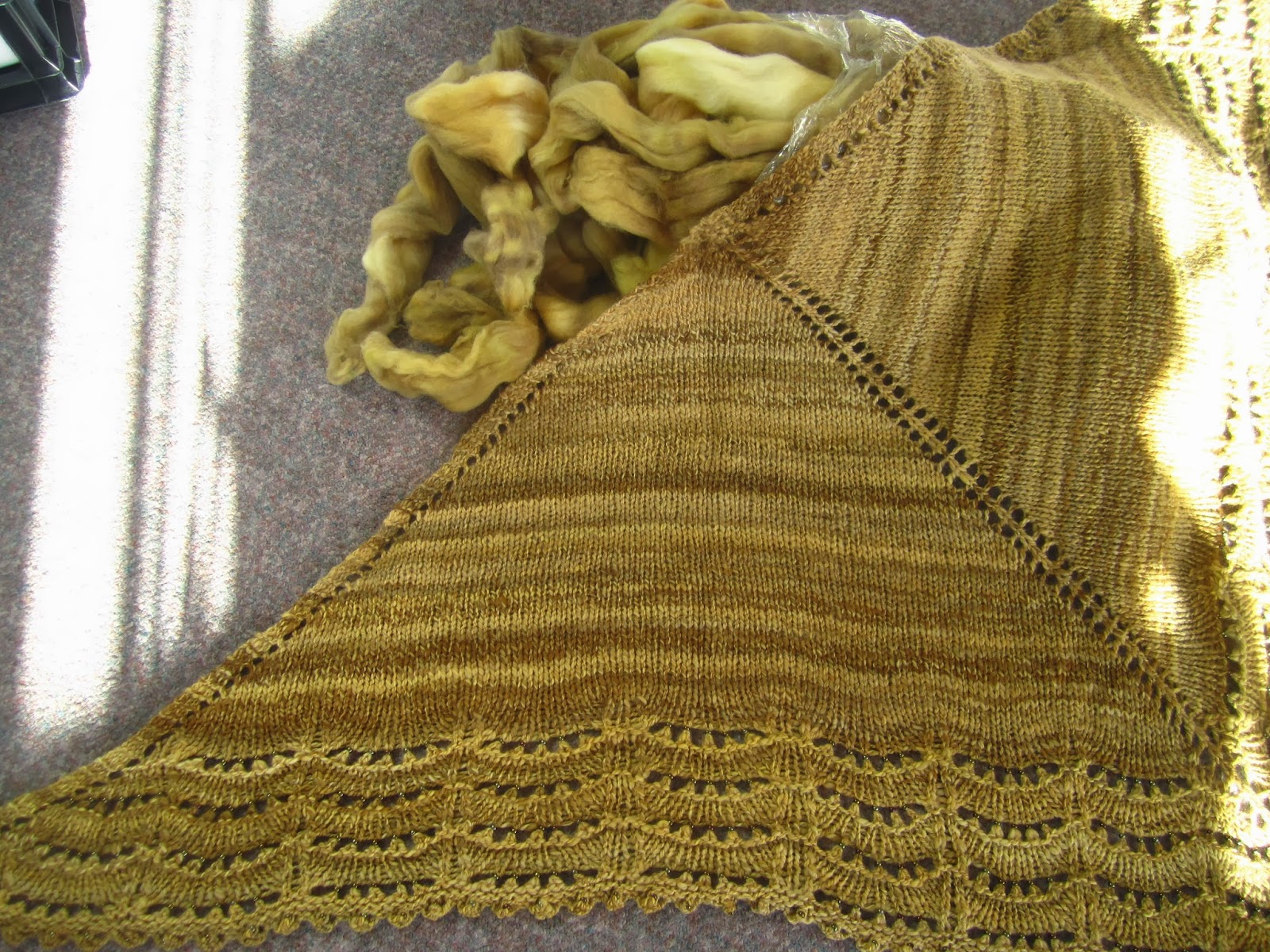 Some of the beautiful handcrafted and intricate boxes and jewelry made of wood by our carpenter, Julia Armstrong. 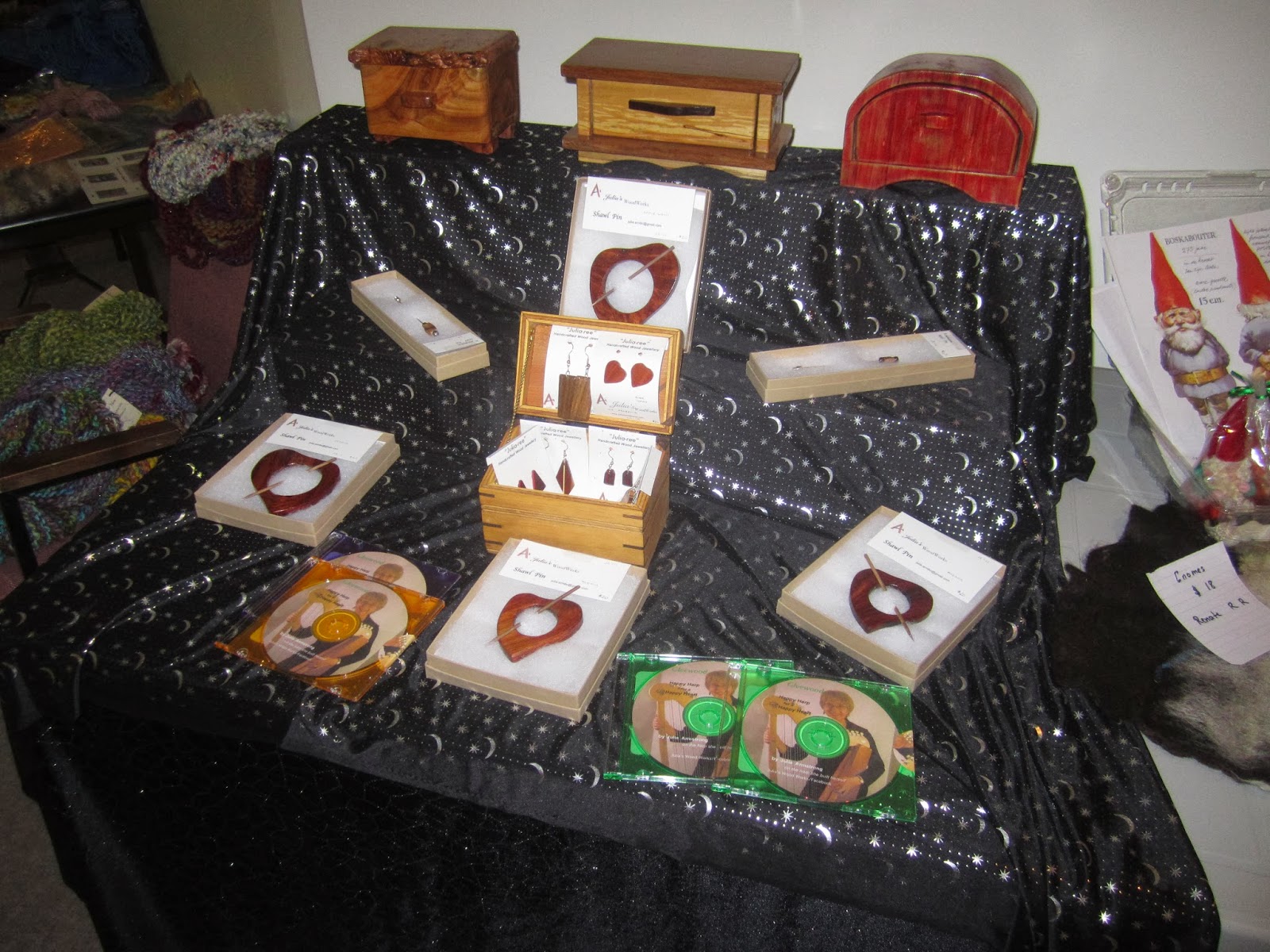 And some of Gudie's funky and fun handspun yarns (I recognize more of my hand dyed fibre!) 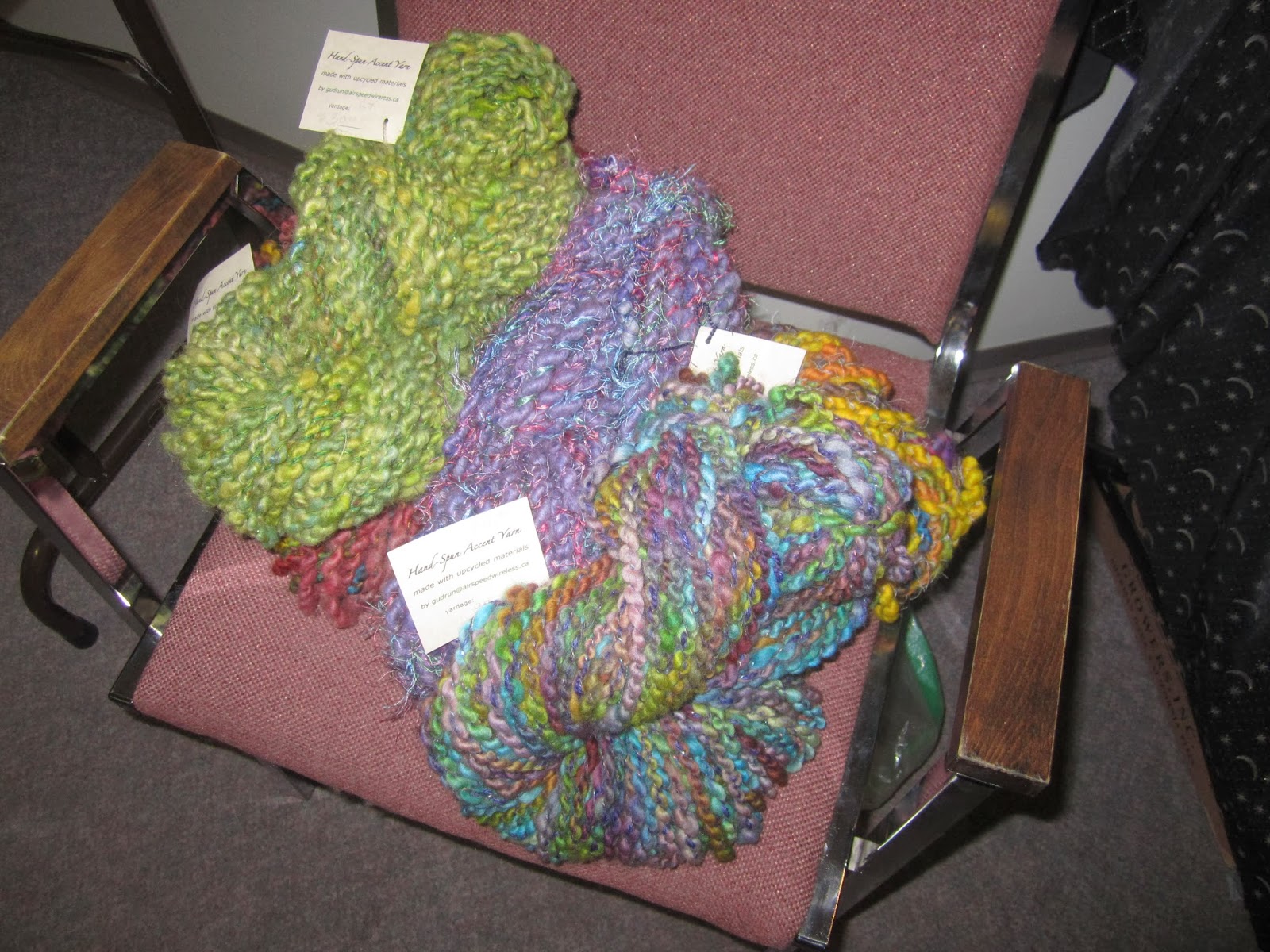 In another posting, I will put my contribution to the 10s -
Top Ten Quotes About Knitting!
The Deadly Duo of Julia and Gudie organized a "Talent Night" on Saturday which probably was the highlight of the weekend, especially the "50 Shades of Grey" story taking place in a yarn shop, perfectly performed by Sue Henry and Michelle Garrett-Jones from Pemberton. They have promised a second chapter.
Interested in attending a retreat in April or October? Contact Sheila Kirk at silk@telus.net.